In addition to the main function of a fan which is cooling your home in summer days, it also works to maintain ventilation around you, expels annoying warm air and also get rid of many kinds of toxic gases as well as repellent smell. Having a cooling fan is also a budget friendly alternative for those who can’t afford an AC or ACs in every room. Before getting your money out of your pocket, take a look at these types of fans so that you can pick most suitable one for your situation. We’ve dedicated a guide for each fan type in which the best ones of each category is reviewed to make it easier for you to choose. 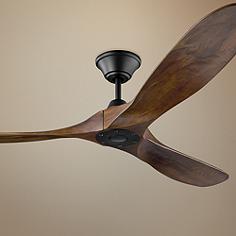 These fans come in many styles, sizes and shapes. The standard ceiling fan has five blades, other modern stylish ones have only three and all perform the task of cooling your indoor. There are also ceiling fans designed for outdoor usage and which are made of special materials to resist rust. You can also find fans with light and a remote control for ease of use. 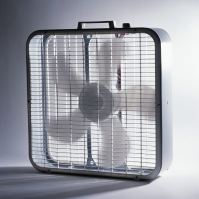 Despite its very basic shape, most of the time rectangular, a box fan is able to change the whole atmosphere of your home or office. Box fans are most used in small spaces because of their relatively low airflow power compared to other bigger fans. They are portable, lightweight, easy to use and their most competitive advantage is their affordable prices. 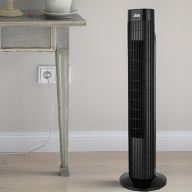 Not very different of pedestal fans, tower fans have also a vertical shape lookin like their name suggest, a tower. Blades are not apparent and are hidden inside of the unit. Tower fans design is relatively more attractive and suits most of contemporary home styles. In addition to their oscillating ability (usually up to 90 degrees) , you can move a tower fan anywhere you want in your house.

As their name suggests, these fans are supported by an adjustable pedestal. This makes them flexible and able to circulate air to a wider area. Most recent pedestal fans, which are also called stand fans, come with a digital display and a remote control. One of the important advantages of this kind of fans is that they can oscillate and therefore distribute air more efficiently and towards the direction you use.

These are the smallest fans of the list. They are transportable and can be placed on your desk, table or shelf. Their price and ease of use are no doubt what makes them so popular but their usage is limited and are more suitable to be used by one person and within small spaces. 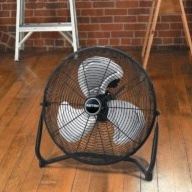 Put on floor, these type of fans are used to cool small areas where you don’t want to place ceiling or wall-mount fan. They are mainly used to circulate air at foot level. The design of this types of fans allows them to be transportable and easy to manipulate. They won’t take as much space as a pedestal fan as well as not making your interior look busy. 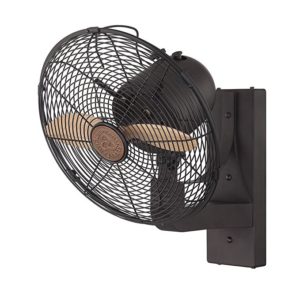 These are oscillating, small-sized types of fans that are placed on the wall of a room for air circulation. Installing a ceiling fan requires the distance between the floor and ceiling of a room has to be at least 8 feet which are not possible for every room. In places like this, a wall mounted fan is one of the best possible options. The components of wall mounted fans are usually made of plastic material or metal. The conventional number of blades is three, but you can find other models with different number of blades. The size of the blades is based on the model of the fan and manufacturer choice. Most wall mounted fans come with three different speed settings, and they are quite easy to assemble as they do come with instruction manual. Wall mounted fans come in two different fan types:

These are small, lightweight and compact fans which come in different fancy designs for customer appeal. They are mainly used in places such as offices, houses, schools, …etc.

They are heavier and bigger in size compared to domestic wall fans. They are mainly built for power and the design is not their first worry. They are used in factories, warehouses, industrial plants, and other places.

Wall mounted fans are able to oscillate pretty much the same as table and pedestal fans. They usually have two pull cords attached to the bottom that function as on and off switch. 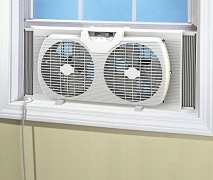 This type of fans are made to be placed in a specially designed space in the wall of a room, either below or beside the window. They are used in cooling down the temperature of a room. The fans draw in cool air from the outside into the room and draw out hot air to the outside. Some of the most important components of a window fan are the thermostat, remote control, automatic shut off and variable speed control. These features make the window fan user-friendly and increase its customer appeal. Most standout window fans usually have an automatic reversible mode. But the choice of window fan has to be based on speed settings, fan size, and power, in relation to room size.

Window fans come with features such as:

Window fans are capable of expanding 40-45 watts of electric power at high speed. Window fans can be used in the bedroom, bathroom, living room, kitchen, dining room, and garage.

These types of fans are placed on bathroom walls or ceiling for an efficient ventilation system, improved airflow, and to reduce excess of humidity. They operate by drawing in excess warm moisture from the bathroom and disposing it outside the house through the ductwork.

In recent years, the bathroom exhaust fans have adopted some new features which makes them more efficient and easy to operate. There is a humidity sensor which automatically detects the humidity level of the bathroom and switches on the fan when the humidity is above a standard level or switches off the fan when it is below the standard level. The bathroom exhaust fan features a motion sensor which automatically turns on the fan or light only when it detects presence of someone in the bathroom. Some bathroom fan models come with heaters which are useful during winter days if you live in a cold part of the world. Most manufacturers have started incorporating integrated lights into their bathroom fan models. The integrated lights can act as an additional lighting or a replacement for existing structure.

Some models come with separate controls for different set of features and also allow to have a combined control for all of the bathroom fan features. 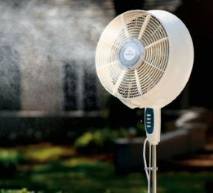 This type of fan looks, usually, like an ordinary pedestal fan with a mist ring attached to it. The misting fan incorporates the use of misting nozzles to produce misty droplets of water, which rapidly evaporates to generate cool air. A misting fan is energy efficient as it is able to generate enough air to cool a room without much energy waste. It is also cheaper in comparison to other cooling options.

The misting heads of the kit are connected to the outer frame of the misting fan. The normal fan can be easily converted to air chilling mist fan with the aid of a Mist Ring and start blowing the vaporized water  in the atmosphere.

There are three types of misting fans based on the area of application. For residential area; there is the low-pressure fan misting kit and the mid-pressure system. For commercial areas, there is the high pressure misting fan. A misting fan can be placed outdoor as most of them are portable and can also be put on your garage.